We are delighted to welcome Callum Watson as our guest blogger for May.  Callum has been exploring the esoteric and mystical at Innerpeffray: here's the first of his three blogs.


Have you ever wondered whether the lines upon your brow read those of a murderer? Do the stars in your sky predict fortune, or rain? These concerns of the mystic, of sorcery, magic and prophecy, seem to be a reflection of something intrinsic in our human curiosity, bonding us as we journey onwards in our exploration of that mysterious Other. In this vein the documenting of supernatural occurrences might be judged, by today’s standards, as the practice of fiction or faith. But, as we must not forget, the tales of witches and demonology, which stand tall in the shelves of Innerpeffray, are in fact depictions of an often-accepted reality.


Many would recognise the scene from William Shakespeare’s adoption of the moment in which Macbeth, soon to be king Macbeth, ‘happens’ upon the three witches, also called the ‘Weird Sisters’ or the ‘Wayword Sisters.’ These three incarnations of destiny foretell Macbeths monarchy and eventually will lead him to his doom and yet, their origins lie not in the summoning powers of Shakespeare but in Holinshed’s Chronicles, 1577, under his section on ‘’The Historie of Scotlande.’’ In this account, Macbeth and his companion Banquo encounter "three women in strange and wild apparell, resembling creatures of elder world." Although Shakespeare’s picture is similar, a difference of interpretation is distinct in the strange but compelling illustrations that accompany Holinshed’s writing. If you look beside his tale then there stand three women of elegance and beauty, probably members of the upper-class; rather unlike Shakespeare’s representation of three withered and frightful hags. 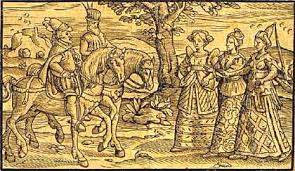 Perhaps it was these representations of witch-lore that encouraged the accusations of sorcery to filter into a common practice of society. Whether the killing of witches, these henchmen of the devil, was a ritual performed out of fear or otherwise is unclear in specifics, but one thing becomes certain as we delve into the shelves of Innerpeffray; the devil seems to have been as much a public figure as God was. 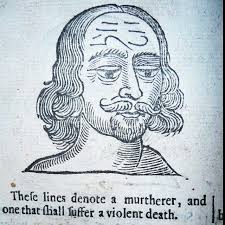 Wander through the Scots Discovery of Witchcraft, 1584, for an insight into Ronald Scott’s exposé into the practice of witch-mongers; how the public were being tricked by charlatans into persecuting poor and aged ‘witches’ for crimes in accordance of magic and devilry. The methods of which, a bad pun, are discussed and illustrated in great detail. Or, perhaps you should read Dr Dee’s transaction with spirits, 16th century. This collection offers an insight into the celebrated astronomer’s drift into mysticism as he attempts to learn the universal language of creation and unify humanity under the threat of apocalypse. Dr Dee’s is an interesting and telling account of the common attitude of the time but whatever your eyes do fall upon, the rabbit holes lie deep and uncovered, please feel free to fall inside. 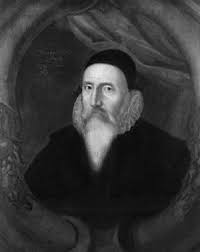 Thank you for reading this short post of mine. This blog is expected to be the first in a series of three, in which I will explore the unconventional curiosities, the mystic and mythological, of Innerpeffray’s shelves. It’s been a great opportunity to explore the library in accordance with this task of mine; and I hope I’ve convinced you of Innerpeffray’s own magic in doing so.


Visit the page next month for the next instalment, or visit the library to read the history for yourself.
Posted by Library of Innerpeffray at 03:59 No comments: