Visitors to Innerpeffray justifiably wonder why two such contrasting buildings are nestled beside each other deep in the Perthshire countryside. The gleaming white eighteenth-century library building at Innerpeffray is not what you’d expect happily to co-exist beside the ancient stone chapel. Yet while the chapel building pre-dates the advent of Innerpeffray Library by nearly 2 centuries, it housed the collection for more than 8 decades, and it is that collection which caused the younger building to be constructed beside its neighbour.  A closer look at early sources about the library give some insight into was the library in the chapel was like, and the circumstances surrounding the creation of its (very close) neighbour.

The Library of Innerpeffray was founded by David Drummond, Third Lord Madertie in around 1680, during the latter stages of his life. It has long been known that the chapel at Innerpeffray was the original location of the library as it is specifically mentioned in his will, the terms of which still govern the library today. The small upper room created in its west end is the only reasonable candidate for its former home, and can still be visited today, by the sure-footed, via a small spiral staircase. 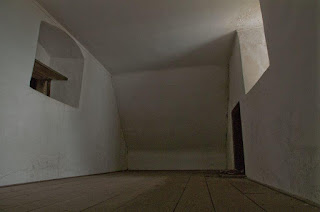 The few surviving archival records from the period do tell us something of the character of the room. The earliest recorded expenditure is “for buying firewood to preserve the books” in 1700 and 1701, and the small fireplace can still be seen, along with its chimney, sprouting incongruously from the chapel roof. Yet the phrasing shows that its inclusion is not, as you might assume, for the comfort of readers, but instead to preserve the books. This is an early hint that books from the library, with its limited space, light and warmth, were meant to be borrowed, rather than read in situ. This type of expense also shows that a priority for the early library was to preserve the existing collections rather than increase or update them.

This priority can be better understood when in 1724 the trustees describe the library as “being a small inconvenient room & not fit to contain one half of the books that already belong to it” and resolve to spend what money they have on a new building as a priority, alongside the purchase of new books.  Efforts towards creating a new building do not reappear in the archival record until the estate at Innerpeffray is inherited by Robert Hay Drummond in 1739. He conceives a space “for the conveniency of such as shall come to read. Also that as may be a proper central place for the Gentlmen of the neighbourhood to meet at such times as they shall appoint” – more a gentleman’s club than the small lending collection of the dark, intimate chapel room.  The books that he chooses for the collection also echo this new vision (for which see Recommended Reading). 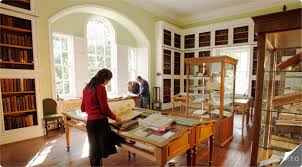 The library building befits that grand conception, with its high ceilings and use of natural light, but what records we have of its use would suggest that not much changed in its move to such a very different location. Such use of space and light would suggest that the architect, and those who signed off on the project, had in mind a grand reading room in which books would be consulted onsite, very different from the intention to lend which had been evident in the chapel setting, but a much more usual use for a library building in the eighteenth century. The borrowers’ register, however, serves as proof that lending continued. The building we have today was in fact intended to be far grander. The trustees veto a plan for an expensive bow window and parapet roof in favour of “a plain roof and three venetian windows in front”, which still continue to serve the library well. 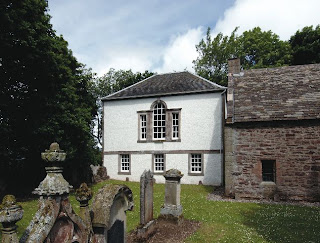 Three big issues seem to plague the planned construction of the library during the period: how to fund it, how to transport materials to the site, and where to put it. It is the latter question which still most puzzles us today. Plans for the building are shown to the Earl of Hopetoun and his advice is specifically sought in the positioning of the new building. There seems no question of the library moving far from its current location, but where to put it? Since we’ve not yet found any record of Hopetoun’s advice, we can as yet only infer it from the decision. 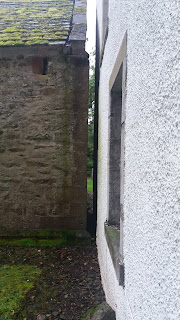 As you can see in the image above, the two buildings, while separate, are merely inches from each other. The river directly to the side of the library plot may have been a limiting factor: It is problematic in the early life of the building, and various efforts in the 18th and 19th centuries are made to sure up the bank on which it sits, high above the River Earn. However, the library could have been positioned a little further north and still avoided the bank. Or, given the luxury of open space in the library room, it could have avoided any problems by being made a little smaller. The overlap is marked and unusual, and we may never know why. So far the only solution we have identified is a rather romantic one – that the books were to be moved as little from their original location as possible. Indeed, some of the books which would have been in the chapel inhabit shelves literally inches from the original chapel room. We’d be very interested in hearing if you have any better ideas!
Posted by Library of Innerpeffray at 08:54 No comments: