'A Book Through Time ' Part I: The Author and The Text.

Inspired by the BBC's A House Through Time, we're pleased to introduce a new blog series which focuses on a single book from its very beginnings to its place on the shelves at the Library of Innerpeffray today. The first post, which looks at the author and content of the work selected, comes from Kelsey Jackson Williams, Lecturer in Early Modern Literature at the University of Stirling. 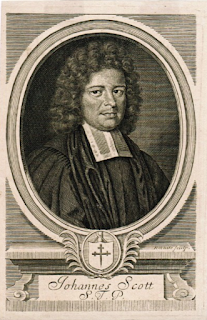 Despite his name, John Scott (1638/9-1695) was no Scot.  The son of a “sufficient grasier” – according to the snobbish antiquary Anthony Wood – Scott was born at Chippenham in Wiltshire and while still young was sent to London to serve as an apprentice (in what trade we are not told).  He did not relish the life his father had laid out for him, though, and after three years of drudgery he gave up his apprenticeship and entered New Inn Hall, Oxford, in December 1658 at the age of nineteen, rather older than the ordinary undergraduate of his day and something akin to what we might now call a “mature student”.

Scott flourished at university, especially enjoying logic and philosophy, but left without taking a degree, perhaps due to a lack of funds.  The next decade of his life is a blank.  Again according to Wood, he was engaged in “some mean employment” which ultimately led him into holy orders.  From 1678 onwards he served in a series of increasingly prominent roles in the City churches: rector of St. Peter-le-Poer, prebend of St. Paul’s, Lecturer and Reader at St. Bartholomew-the-Great, and Rector of St. Giles-in-the-Fields, “at all which places he obtained a great name, and was much resorted to for his most admirable way of preaching”.

It was Scott’s skill as a preacher which allowed the Wiltshire lad to rise through the ranks of the Anglican Establishment.  In an era when preaching was a highly prized skill and the fashionable citizens of London would flock to whichever church could boast the most eloquent orator in its pulpit, such abilities could catapult even an obscure priest into the limelight.  Unlike many of his contemporaries, however, Scott was no politician.  He toed the political line, whether under the Stuarts or William and Mary, expressed a conventional and relatively mild dislike for James VII and II’s Catholicism, and would have “been a bishop, had not some scruples hindered him”.  The funeral sermon preached by his friend Dr. Zacheus Isham upon Scott’s death painted a portrait of an altogether blameless man, most memorable “for his Kindness, and Humanity, and amicable Disposition, and Affability, and pleasentness of Temper, and Condescension, and Sincerity, and readiness to do all good Offices for any that had recourse to him”.

But despite these accomplishments, Scott was most known, in his own lifetime and after, as a devotional writer.  Chief amongst his works was The Christian Life, from its Beginning to its Consummation in Glory, the first part of which was published in 1681, with a much-expanded second edition appearing 1683-1687, and which by 1730 had reached its ninth printing.  The volume under discussion in this series of blog posts is part two, volume two of the second edition. 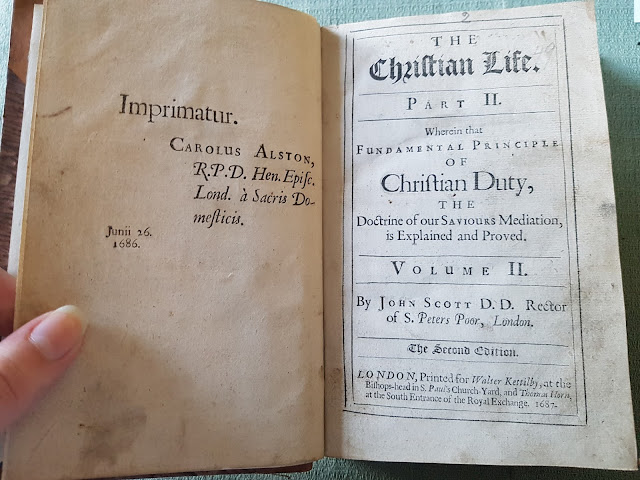 The subject of this volume of Scott’s expansive work is succinctly set out on its title page, which states that within “that Fundamental Principle of Christian Duty, the Doctrine of our Saviours Mediation, is Explained and Proved”.  The six hundred-odd folio pages which follow set this forth in copious detail, laying out the necessity of Christ’s mediation between the devout Christian and their God, and exploring the nature and extent of that mediation – Christ’s “Kingdom” – through a close reading of the relevant Biblical passages.  In the thorny windings of Scott’s reasoning we can see an echo of the young Oxford logician and metaphysician at work in the mature priest:

Considering therefore how much we are governed by our sense in this state of our Apostacy, it was doubtless a wonderful wise contrivance of God, who is a pure Spirit, to assume to himself some sensible matter, that therein by presenting himself to our outward or inward sense, he might strike the deeper aw on us, and thereby the more effectually rule and govern us (p. 568).

Such arguments were part and parcel of late-seventeenth century Anglicanism’s larger project of explaining Christianity to an increasingly skeptical world.  As Scott had written earlier, “we cannot certainly distinguish what is done by the Spirit from what is done by our natural Reason and Conscience co-operating with him . . . it is not to be expected that we who know so little of the nature and intercourse of Spirits should be able to render a clear and distinct account of it” (pp. 80-81).  Ultimately, then, the Christian Life was more than just a devotional manual, it was the work of a philosopher grappling with the nature of belief and straining against the physical bonds of his own body to explore the metaphysical world of consciousness and the Divine.  “For alas! our minds are naturally so vain and stupid, so giddy, listless, and inadvertent, especially in spiritual things which are abstract from common sence” (p. 85) that these philosophical wrestlings were necessary for belief to survive at all.


Posted by Library of Innerpeffray at 08:08 No comments:

Some of you may have spotted this recent news story, where a library borrower developed a 'code' for marking which books they had already borrowed, so as not to borrow them again. Completely by accident, as this story emerged, Keeper Lara Haggerty and PhD student Jill Dye discovered something which looked like one of the borrowers from Innerpeffray, Scotland's first free public lending library, may have been doing something similar.

The Library of Innerpeffray has records of loaning its books to the local public from 1747 to 1968. Despite such firm evidence for their borrowing, the books themselves (almost 90% of which are still present in the library) contain very few markings by any reader, and those marks which are present tend to pre-date the book entering the library's collection. This, alongside the incredible survival rate of borrowed works, would suggest that the books were relatively well cared for by library users, ensuring that they were safely returned undamaged and unmarked.

However, while in pursuit of something entirely different, Jill and Lara spotted a few books which, while not annotated, did have handwritten dates close to their title pages, all around the year 1826. With a little further investigation using the borrowers' register, they managed to work out what tied these titles and dates together: a man called Robert Taylor.

Robert Taylor borrows from the Library between June 1825 and September 1826. He never lists his occupation but is recorded as living in the Parish of Blackford. We cannot ascertain his occupation with any degree of certainty since there are multiple individuals of that name in that parish at that time, but we can rule out his being a student or a minister since he does not appear in such registers. The works he chooses to borrow give us no indication either, since he chooses a fair amount of philosophy, but also the works of Shakespeare and the remarkable-sounding 'Coffee-house Jests', which unfortunately is no longer at Innerpeffray [NB if you have a mystery copy which has any evidence of a former bookplate or unfamiliar library markings, we would love to hear from you!]

The pencil annotation recorded in the first volume of Shakespeare's Plays is most fascinating of all, because of the additional information it chooses to record. Taylor writes 'Innerpeffray Library, 25 May 1826 to be returned'. 25 May is not the date on which the book is due to be returned, but the date on which it is borrowed. 'To be returned' therefore, alongside the fact that the library has also been identified, would indicate that Robert Taylor is almost certainly borrowing books from other collections, and this is the means by which he can identify the home location of each item. While it had always been a logical assumption that, particularly by the 19th century, Innerpeffray would not be the sole source of books for its users, evidence of library use (borrower records, visitor books) is so rare that it has not thus far been possible to prove. It is fantastic, therefore, to finally be able to confirm this, and by such unusual means! 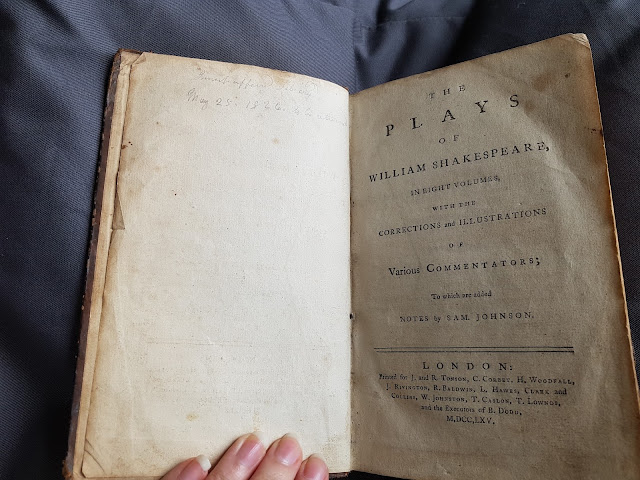 This episode shows precisely the value of matching Library Records to the exact books which were borrowed. While it is exciting finally to be able to pin down an individual writing in an Innerpeffray book, we must add that writing in library books is still not to be encouraged. However, if you simply must, please make sure to follow Robert Taylor's example, and only do so in pencil.