It's National Libraries Day - a perfect time to celebrate Innerpeffray library's history - and now an irreplaceable piece of that history has been returned after it was found tucked inside a book 200 miles away. 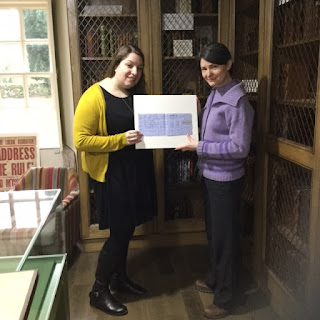 A library well-wisher found a handwritten sheet of 19th century paper listing names, addresses and book titles tucked inside a second hand book in a shop in Kendal. He sent the sheet to Innerpeffray, thinking that it might be of interest, since all but one of the addresses were given as nearby Crieff. On opening the envelope, Library Keeper Lara Haggerty was astonished to find that it was in the familiar handwriting of one of her predecessors. Lara was able to identify the document by comparing it with the relevant period from Innerpeffray’s unique record of borrowers.


The return of the piece is remarkable since the paper itself made no mention of Innerpeffray at all. Fortuitously, the discoverer had visited the library in the 1980s and remembered seeing similar records during his visit.  His letter describes the discovery and the potential link to the library he’d visited decades ago as ‘a bit spooky’.

The page lists books from the library which had not been returned between 1882-1888. It seems that one of the previous Library Keepers went through the register searching for books which were unaccounted for, and successive keepers duly sought after their return. Remarkably, every single book on the list was eventually recovered and all of them are still on the shelves at Innerpeffray. Mrs Birnie, Keeper from 1890-1914, added a small note to the bottom of the borrowers’ register noting just how late one of the items was!

The return of this document gives new evidence of the steps that diligent library keepers took to recover any books missing from the collection. What we don’t know, however, is whether the librarian made any charge or fine for such an overdue book.
Posted by Library of Innerpeffray at 00:00 4 comments: